The story of Six Dogs Distillery started in 2013 in the most humble way: a shed normally used to house our six dogs and a makeshift copper still. Since then, we’ve grown as a business and team, but our core values, passion and promise to make the finest gin we can remains constant. Here are 10 things that you probably didn’t know about us.

1. Our Karoo gin recipe was developed over two years

To get our Six Dogs Karoo gin recipe perfectly balanced took the Six Dogs Distillery team exactly 187 iterations and over 2 years of trials! We believe that it’s best enjoyed with ice and some good quality Indian tonic, or simply neat. The addition of any garnish will actually unbalance the flavours that took so long to refine.

2. Our first still was made out of a geyser

Our very first distillation was on a makeshift still – an old copper geyser converted into a still – set up in the shed where the dogs sleep on the farm.  This still has since been sold and replaced with a series of larger and custom built stills that are used for experiments and production today.

Founders, brothers Charles and Glenn Bryant, and Luigi Marucchi, went through hundreds of names before settling on “Six Dogs”, even conducting a survey to establish preferences amongst friends and family.  Some of the options included “Bryant’s Gin”, “Renegade”, “Adamastor” and “Betelgeuse”. The name “Six Dogs” was eventually chosen to honour the early days of gin-making in the shed alongside the ever-faithful six dogs that kept Charles, the master distiller, company.

4. Our bottle is based on a hip flask 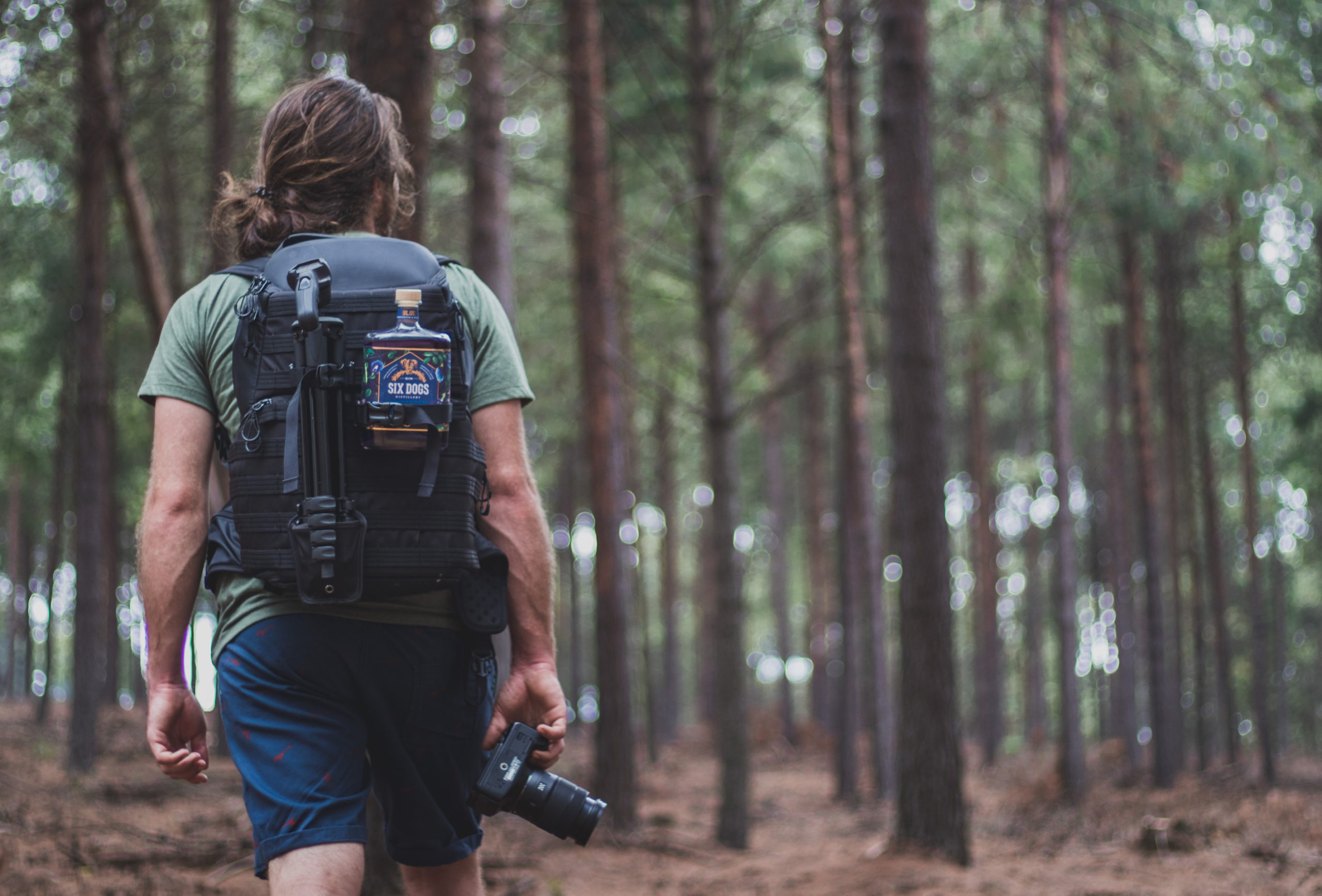 The founding trio also investigated several bottle shapes before settling on what has now become the iconic Six Dogs bottle. It’s loosely based on a hip flask concept, symbolising adventure and a hint of mischief.

5. Our first customers were Jonathan (“Shorts”) Dewes and Peer Iuel

We are ever grateful to our first customers, Jonathan (“Shorts”) Dewes and Peer Iuel, their invoices dated 22 and 23 November 2016 respectively. Both are now Six Dogs Ambassadors who continually amaze us with their unselfish energy in promoting our brand.

6. Our first South African trade customer was The Royal Hotel in Riebeek Kasteel

Charles managed to persuade The Royal Hotel to order a case of Six Dogs Karoo gin when attending a friend’s birthday at the hotel in November 2016. A few days later, we secured our first off-consumption order with Hillcrest Tops in KwaZulu-Natal. It’s important to us to be fully connected with all our on-consumption outlets, retailers and of course, our customers, as without them we only have products, but with them we have a brand.

Our very first export order – for 90 bottles of Six Dogs Karoo gin – was in May 2017 to Elvama in Belgium. Fast forward to 2021, Six Dogs is enjoyed in South Africa and 23 countries around the world.

8. We had mixed feelings about Six Dogs Blue

At first Glenn, one of the three founders, believed that the colour of Six Dogs Blue might actually harm the brand’s reputation by being a little “gimmicky”. He was soon convinced after he saw its colour-changing ability and thanks to his incredible marketing efforts, it has become the brand’s top selling product. 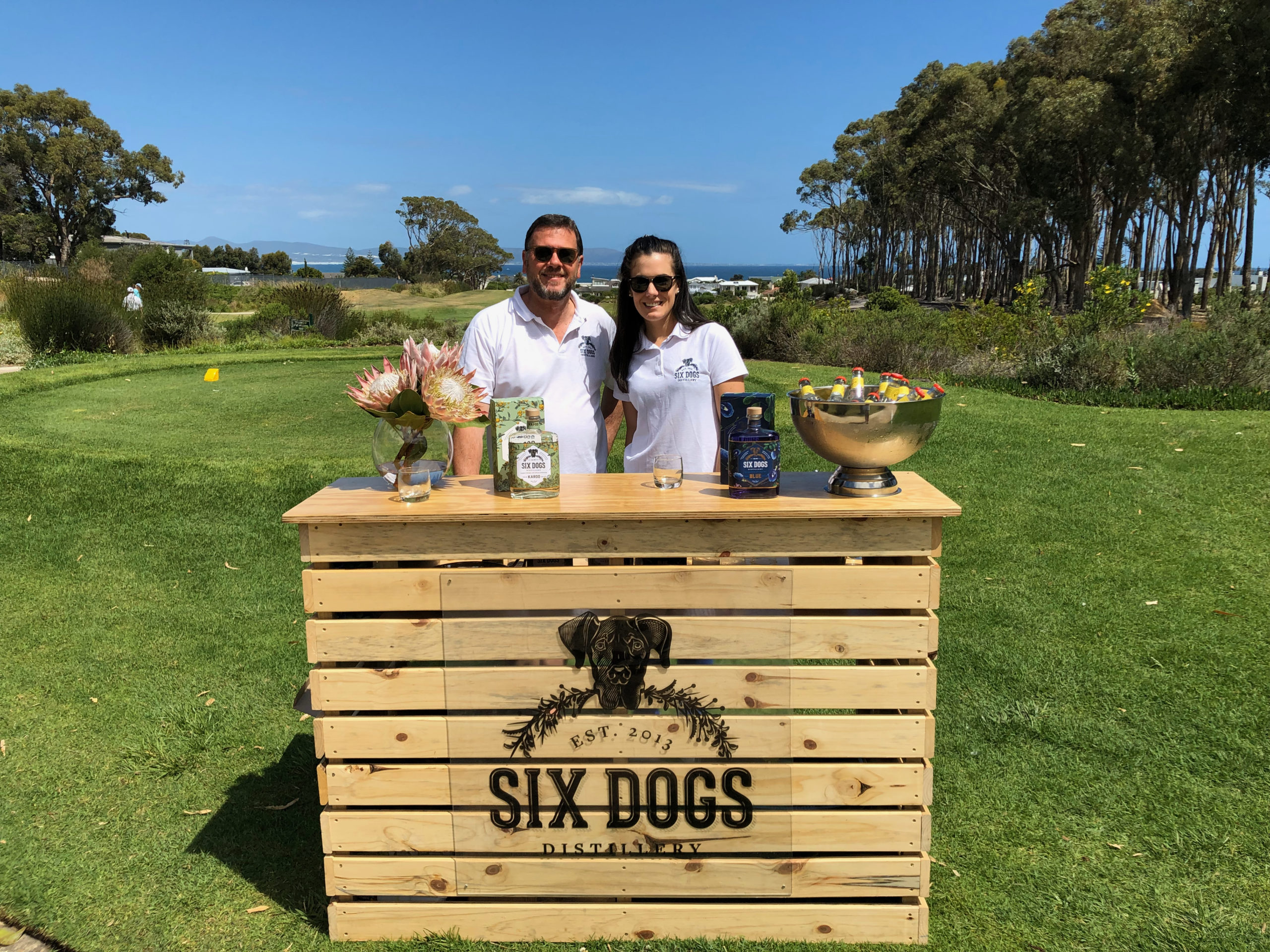 Did you know that Six Dogger, Nicole Porteous, has been asked if she is the daughter of Glenn, a sum total of 27 times? It must be their good looks!

Six Dogs Gins have had many adventures both locally and abroad, but one bottle of Blue in particular took on the Tongariro Alpine Crossing in New Zealand, one of the country’s most famous day hiking trails which wanders through Tongariro National Park, a World Heritage Site. The bottle was snapped next to one of the trail’s iconic sulphur pools, which looks like it could be on Mars.

Nestled in the little valley of De Wet in the Western Cape province of South Africa, Six Dogs is, at its heart, a tribute to the spirit of innovation and adventure, while our range of hand-crafted premium gins pays homage to family, friends, our partners in the trade, gin-lovers in South Africa and around the world, and our ever-faithful six dogs.

We use cookies on our website to give you the most relevant experience by remembering your preferences and repeat visits. By clicking “Accept All”, you consent to the use of ALL the cookies. However, you may visit "Cookie Settings" to provide a controlled consent.
Cookie SettingsAccept All
Manage consent

This website uses cookies to improve your experience while you navigate through the website. Out of these, the cookies that are categorized as necessary are stored on your browser as they are essential for the working of basic functionalities of the website. We also use third-party cookies that help us analyze and understand how you use this website. These cookies will be stored in your browser only with your consent. You also have the option to opt-out of these cookies. But opting out of some of these cookies may affect your browsing experience.
Necessary Always Enabled
Necessary cookies are absolutely essential for the website to function properly. These cookies ensure basic functionalities and security features of the website, anonymously.
Functional
Functional cookies help to perform certain functionalities like sharing the content of the website on social media platforms, collect feedbacks, and other third-party features.
Performance
Performance cookies are used to understand and analyze the key performance indexes of the website which helps in delivering a better user experience for the visitors.
Analytics
Analytical cookies are used to understand how visitors interact with the website. These cookies help provide information on metrics the number of visitors, bounce rate, traffic source, etc.
Advertisement
Advertisement cookies are used to provide visitors with relevant ads and marketing campaigns. These cookies track visitors across websites and collect information to provide customized ads.
Others
Other uncategorized cookies are those that are being analyzed and have not been classified into a category as yet.
SAVE & ACCEPT